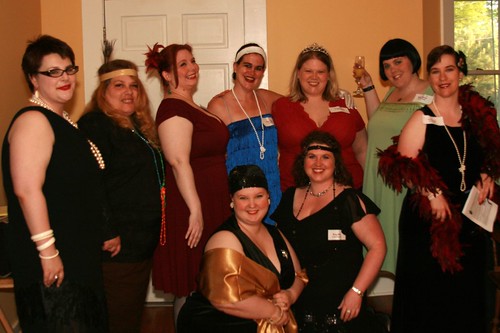 Last Saturday I ran my first parlor larp titled "The Four Deuces". It was the second parlor larp we've played (the first was for Paul's birthday in October, 2006, called "The Auction").

Parlor larps, often called murder mysteries, are themed one-shots with preset characters that are geared toward an audience of non-gamers, although experienced roleplayers can have just as much fun. Rule systems are mostly unnecessary, but those rules that are made are simple and few in number. Dinner is shared, costumes are worn, and many a toddy is consumed.

"The Four Deuces" was a speakeasy, gangster, roaring 20's themed larp. The costumes were great and I was exceptionally proud of everyone's playing ability, even the ones who had never gamed before. Liz, who at one time thought roleplaying was when people sat around and pretended to be other people in the room (and who takes our teasing about it with great spirit), had everyone in the game tied to puppet strings! 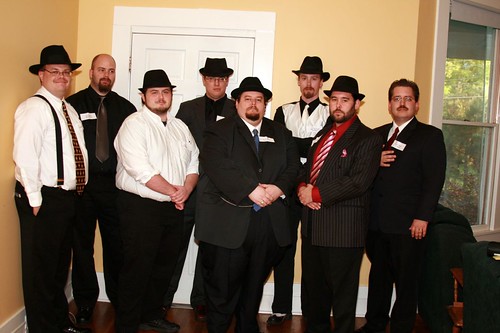 I have no doubt I'll be running another one (or even writing one) by the end of the summer.

Despite being mortified about putting a current picture of me on the web, I am so proud of my very dear, genuine, intelligent, witty, and creative friends that I am posting Liz's pics from that night. Not as many people who initially expressed interest were able to make it (which is good since I ran out of characters), but everyone who did come said they had a fantastic time.

I have not felt posty in a while until this morning (and honestly I think my writing has suffered because of it). Have you missed me and my constantly-edited posts?

My life has run the gamut of frenzy and idleness.
The summer has been a socially busy one, and I have good use of google calendars. We've had something planned nearly every day of every weekend since April. It is blissful having John & Liz back from Pennsylvania. They are now installed in their edibly-fragrant, cat-happy, guitar-slinging, Opthra Stewfry-idolizing*, monkey-balling house in Oxford. Sadly, there is a population cap in utopia, so we had to say goodbye to Kirk & Steph (married, moved to Brandon in May) and Jessica (left August, St. Louis, for a pesky education) and Monkey (who is now state-side from the war, but followed his heart to St. Louis). I miss them even more than I expected.

Life, in its flighty sense of justice, has measured us out four beautiful new friends: Claus, Kirina, Charlie and their new baby A.J. with whom we have developed a kinship. They cancel out any inkling of grinchiness I may have - it is impossible to hate humanity when they're around.


I'm still not a foodie, but...
Since moving into this monstrous house, I have been working on the habit of maintaining a clean and working kitchen. This has been hard for us in the past with a tendency to laziness and roommates. We started with some appropriate-use guidelines, which helped, and I ditched some of my bitterness.

I have started keeping certain of the more flexible ingredients for real cooking in my kitchen at all times. I always have a quart of cream, a bag of spinach, real butter, eggs, quick-thawing frozen chicken, potatoes, and parmesan and cheddar cheeses. More and more of my dishes will not stand to be reheated in the microwave and must be warmed in the oven, which is how I've judged my growth as a cook.

We're trying to eat at home more often to save money. So far it's working, but usually not with such elaborate recipes as last night when I made:

chicken cordon bleu - pounded flat chicken "tenderloins" (i.e. a marketable way to say chicken strips cut from the breast, which are indeed more tender with one bit of connective tissue running up the center), seasoned and sandwiched with a layer of ham and swiss cheese and more ham then flour coated, egg-washed, and bread-crumb crusted then pan-seared on each side in olive oil. Believe it or not, this was a dish I chose to make use of what was "left" in our kitchen. I had to make the bread crumbs out of croutons and dried sandwich bread.

baked beans - a childhood favorite made with lots of additives both for taste and texture: bacon layered on top, bbq sauce, ketchup, mustard, worchestershire, maple syrup, garlic, and minced onion.

twice baked potatoes - I don't like to reuse the skins; I just use several single-serving baking dishes. They had cheese, real bacon, butter and ranch dressing (in lieu of sour cream, which we did not have).

For dessert we had my homemade chocolate sauce and toasted coconut over blue bell vanilla ice cream, which has become a recent favorite.

I spent way too long in the kitchen, but I think as I start to cook more, I will get speedier. We've also had lots of events to cook for. With John's and Liz's return, we've started semi-regular (now in its infancy) pot-luck, as some might call a supper club. Both larger orchestrated events with fifteen or more people, and smaller get-togethers, have been very effective.

Forgive all the typos and made-up words. I'm ready to go do something else now. Probably breakfast.


* At first I just typed Martha Winfry, but lest the reference to Oprah Winfry and Martha Stewart was thought a typo, I deliberately made it more complicated.

Everyone seemed to have a good time, the food was pretty good, it was a darling location, and we all felt especially girly, which is out of character for most of us.

frolicswllamas, Tiffany, and I all climbed into the car wearing skirts and flowery, sparkly jewelry and carrying glossy, super-saturated colored gift boxes.

A super-tasty punch (mostly cranberry, like candy!), turkey cream cheese roll-ups, bacon thingies, shrimp cocktail, cheese and broccoli mini quiches, a hearty and superlative chicken salad (I even liked it), a simple but scrumptious cheeseball, dinner mints and an enormous cake were laid out. I brought four bottles of champagne, and we ate, chattered, played silly ice breaker games, and opened presents.

kirk_daniel's mother polished off a whole bottle of champagne by herself then followed us back to the house where she just made herself at home on the porch. It was unexpectedly comfortable and nice! :)

I've forgotten a word. It's a fairly important word. It means the study of knowledge or how knowledge is acquired.

If anyone knows this word, could you please return it to me?


Saturday is my birthday.

zordac is going to make it a just-the-two-of-us (sing-song) day. Thus, we will be celebrating with friends on Friday night.

I still don't know what we'll be doing, but most likely it'll be at the house unless I decide that I must dine elsewhere before festivities.

If you're free and would like notice of what I may-if-when decide to do on Friday, please let me know.

We had originally planned to host Thanksgiving for Jimmy's family this Thursday. However, with all of the medical trouble that they've been having lately, Betty (Jimmy's mama) decided to head back up to St. Louis and we all cancelled.

This will be my first weekend in the house in a couple of weeks, so we've decide to forego all over family-issued invitations and still cook here.

So heretofore any of you have no set plans, you are most welcome to come by and sample our roast duck (I'm hoping to convince Jimmy to do Peking duck!) and asundry fixin's any time after 2PM on Thursday.

Even if you ain't hungry, you may still come by for company and football.

Tiffany's birthday is tomorrow, guys, and I don't know what to do to celebrate.

She wants to be able to have the girls around (she's going to be out of town for part of the week on a business trip) so that limits what we'll be able to do.

This Saturday night at our new house in Water Valley, we will be celebrating the anniversary of many friends' births.

navydave, and Tim Wilson were born on September 10th.

John & Liz will also be arriving that night for an extended stay. There will be much to celebrate!

I forgot until last night that Jimmy and I are going to be busy tonight. We have to (and want to) go to a surprise graduation party for his very close cousin Tammy who recently finished massage therapy school.

We'll be in Mooreville until midnight-ish tonight.

Perhaps we can do Sci Fi Saturday? I know this probably upsets plans made by our WoW friends for which I apologize.

Guys, what are the plans for July 4th?

I've come to realize that I often wind up making plans for everyone. I like the fact that our home is a place that we can all hang out at any time, but I've grown bored (and am afraid you are, too) always hanging out at the same place. Plus, I need very little provocation for throwing a party (I love to just celebrate life!) and I often fear that I'm shoving to many lukewarm parties down people's calendars. I don't want to usurp and undermine other people's ideas and plans.

I also going to start trying to plan smaller affairs with fewer people so as to create a series of more intimate gatherings. This is in contrast to my default of inviting every-damn-body to a giant party and trying to mesh everyone's schedules. It doesn't mean we won't still have Conglomerati parties when they come around, but in general, I'm trying to switch things up a bit so I can have "quality time" with people.

So, here are my questions -

Do people want to have a July 4th party? If so, where would you like to have it? Would anyone like to host or we could even do something completely different like trudge out to the Grove or Sardis or Lake Enid for all of the Water Valley people or Puscus. Whatever, doesn't matter. I just want some variety.

Or we could do a non-traditional Independence Day celebration. We could pledge to do volunteer work or rally about gas-guzzling trucks or see about taking a party to a women's shelter or orphanage. Hell, I dunno.
Collapse